See How Easily You Can Get Cool Costumes in Poptropica

One of the best things about Poptropica is the Costumizer feature, which allows you to immediately copy just about any costume you see a Poptropican wearing while you adventure around the islands on your quests. Although most of the outfits that Poptropicans are wearing are kind of ordinary, there are some really great costumes that you can find on some of the starter islands. All of them are pretty easy to get and don’t require too much effort. A little later, I’ll highlight some extremely cool costumes to find in some of the more advanced islands like Astro-Knights and Counterfeit Island, but for now let’s stick with the easy ones!

Note: If you’re not already familiar with the Costumizer feature, be sure to take a look at this Poptropica Costumizer Tutorial to learn the basics on how to copy costumes in the game.

Who doesn’t love Shark Boy? This is a great costume to get and it even comes complete with a dorsal fin. Plus, Shark Boy is ridiculously easy to find. Just go to Shark Tooth Island and walk over to the Shark Museum on the right. Go inside and you’ll find Shark Boy looking mighty depressed at the bottom of the museum. One quick click on the Costumizer and this shark outfit is all yours. Fish not included. 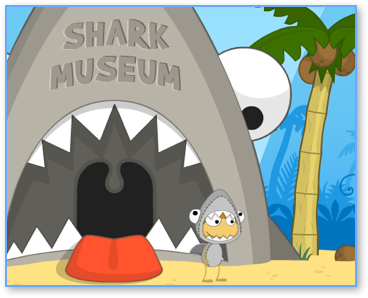 This one is probably the easiest to get. In Early Poptropica Island, there’s a Pop Art museum just to the left. Walk inside and you’ll get to meet Leonardo da Vinci, Pablo Picasso, and Vincent Van Gogh. You can costumize any of them, but unfortunately you’ll learn something very important about the costumizer: you can’t costumize facial hair. Although the Leonardo look is a little incomplete without the cool beard, the outfit is kind of nice. It looks best with the jet pack you get up in the clouds near the giant. Leonardo would have loved to fly this way. 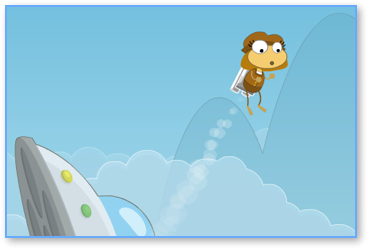 I'm not sure Leonardo da Vinci had this in mind when inventing his flying machine.

This one’s a little more challenging than the others, but still pretty easy to get. Head to Time Tangled Island and start your quest. There are a few steps you need to do before you can get this one. They are:

Now you’re ready to lead your viking army into battle! 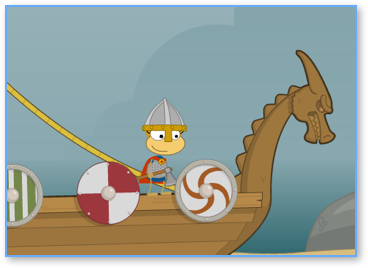 This costume is also in Time Tangled Island, and it’s a little easier to get than the Viking Armor. For this one, just head to 1953 A.D. and then start climbing up the mountain. You’ll need to navigate over some ledges and chasms. Once you get near the top, you’ll also want to watch out for falling icicles, but overall it’s not too difficult to get there. You’ll arrive on top of the world and find two mountain climbers at the peak. One of them is Sir Edmund Hillary and the other is his sherpa, Tenzing Norgay. This costume is actually a combination of the two. For some reason, you can’t costumize Sir Edmund’s goggles, only Tenzing’s can be worn. And I liked the blue backpack better than the brown one. 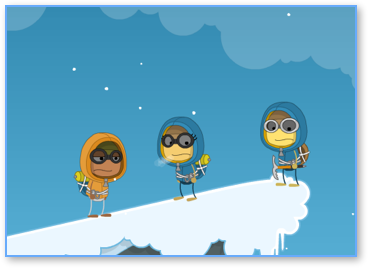 Wow, it's really cold up here on Mount Everest!

Well, there you have it. Some great and easy costumes to get in Poptropica. Stay tuned for more cool costumes from some of the later island quests in the game. In the meantime, what do you think? Share some of your favorite costumes here in the Comments section!