Poptropica’s costume revival month returns with this week’s re-release of the Skullduggery Pirate and Paper Boy outfits in the store. Both of these costumes are only available to paid members in the game. 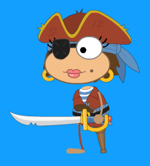 Aaarr! It be the Skullduggery Pirate!

The Skullduggery Pirate first appeared right before the release of Skullduggery Island (of course!) and it features all kinds of pirate goodness like a hat, earrings, a cutlass, a peg-leg, a belt with a gun, an eyepatch, and even a bandana. This thing is loaded with accessories! It even comes in four different colors: red, green, blue and brown. The costume even has a special move: press the spacebar to smile and twirl your cutlass in a circle. Aaaarrr! It’s just in time for September 19, which is International Talk Like a Pirate Day.

The Paper Boy (and Girl) costumes came out earlier this year, in March. They were made available to members to celebrate the then upcoming release of Wimpy Wonderland. These are highly stylized costumes that cover you in notebook paper. In addition, the costume card comes with the “paperize” power, which lets you apply the effect to any Poptropican that you come across in the game.