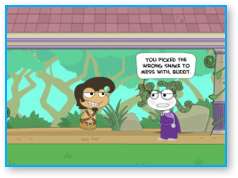 Hercules and Medusa in Mythology Island

Late in the quest for Mythology Island on Poptropica, you and Hercules will encounter the Medusa, one of the most dangerous creatures from Greek Mythology. In Poptropica, she quickly turns Hercules to stone and he becomes a statue. All of this happens during one of those cut-scene moments in the game where your cursor turns into a spinning circle. This means you can’t use the always popular costumizer feature to copy the Medusa’s look.

But wait, what’s this? How come you can see Poptropicans in the multi-verse rooms wearing Medusa’s snake hair? And more importantly, what secrets and Poptropica cheats did they use to get it? Aha, it’s not a cheat or secret at all, but an older item from the Poptropica store. Back last year (June to be exact), the Poptropica creators released a bunch of new items into the Poptropica store and one of them was Medusa hair. I guess they were already thinking about Mythology Island back then. It’s an item that you can use on anyone in the game, including yourself. 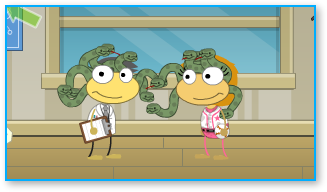 You can use the Medusa hair on yourself or any other Poptropican you see.

You can still get the item in the Poptropica store for credits or for free if you’re a paid member. Get it now and have some fun. 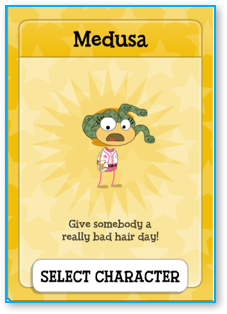 The Medusa card in the Poptropica store lets anyone have snake hair. Eewwww!