Hey everyone, I know it’s been a while since we’ve posted any really good Poptropica Costume cheats. Strange Moon, where have you gone? So this week, we’re featuring a classic: how to create a Harry Potter costume. There are a lot of variations on this, but here’s one of the easiest ways to assemble the costume. You don’t need to be a paid member to get all the pieces, but it will be a little easier. You need to visit the following places: 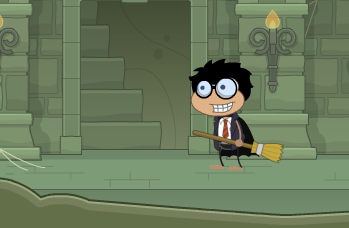 OK, here’s what to do. First, head to Time Tangled Island and visit the professor standing next to the future machine inside Pendulum’s Lab. USe the Costumize power on him to get his glasses. Next, go to Red Dragon Island. Stop outside the Magic Tree House bookstore on Main Street. There’s a guy out in front with a jacket and tie. Costumize him and grab his tie/shirt, jacket, pants and belt. The next part is the hair. To be as much like Harry Potter as possible, you want something really messy. Since we’re already in Red Dragon Island, you can head to the treehouse. Jack has the perfect hair. You’ll want to colorize your hair to be black so that it’s 100% Harry. Use the Colorizer power card if you have it, or just visit the Diner in 24 Carrot Island and use the colorizer drinks if you don’t.

Now for the final touch: the accessories. You’ll need the Haunted House card from the Poptropica Store. It’s free if you’re a member, but it’s expensive if you aren’t. Go to the Haunted House. If you’ve already completed it, just head down to the party right from the entrance and use the Costumize feature on the Witch. Take her cape and her broomstick and there you have it: Harry Potter in Poptropica!

Need some more help? Check out the video, which shows how to put everything together.

It’s also easy to create a Hermione costume. All the pieces are the same except you grab the backpack from Jack instead of the glasses in the treehouse in Red Dragon Island. If you’d prefer, you can use the Magician’s wand (it’s an item from the Poptropica Store) instead of the broomstick. Pick some suitable brown hair and there you have it: Hermione Granger, super-smart witch. 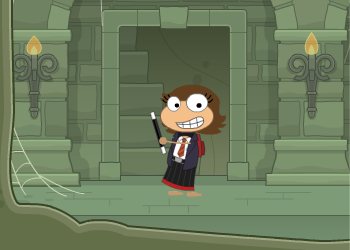 Hermione Granger showing off her magic skills with a wand in Poptropica.